One of the best parts of being a streamer is the fact that you act as a hub around which a community forms. To start with, the community will ebb and flow with your streams. After a little while, if you want to grow your stream, then growing your community becomes a necessity (and unless you got into streaming for a very different reason to me, you will want more than just your streams as a way to interact with people). That usually means a Discord server, and the right moment for a streamer to make one will be different for everyone. There are streamers with nearly 1000 followers who don’t have them, and there are some who will set them up preemptively. I opened mine at around 275 followers.

One of the most important things for me, when I thought about the kind of community I’d like to be the hub of, was that it would be safe and inclusive. I’ve spent my whole life not fitting in, being excluded, and looking over my shoulder when I should have been relaxing, and when I realised I’d be the custodian of a community, I committed myself to ensuring nobody in it felt that way. So, once I’d made that commitment to myself, I had to figure out how to make it a reality.

I wrote up my commitment and looked around for ways that I could achieve it. I was recommended this really good video on Discord safety by Stephaneee_Plz and implemented what she suggested, which works really nicely. However, I really struggle to work along with videos and wanted a written guide, so figured I’d create one in case anyone else prefers this method. 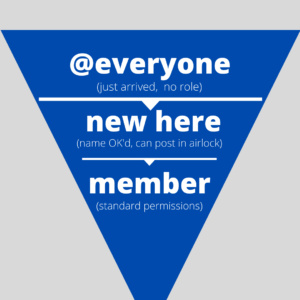 It essentially sets up a two-tier airlock to separate newcomers and community members. A user starts without permission to see or do anything. Then they can post something/react for a role/whatever you need (I require my newcomers to say hi to the mods and choose a pronoun role), and then be made a proper ‘member’

The reason this is so important is that you can’t just declare something to be a safe space – you have to ensure that safety by using systems like this. By having this system I am doing what I can to foster a safe environment.

A written explanation will probably make this all sound quite complicated so let me break it down into summaries and steps for you before going into detail.

Important to emphasise – regular members can not see either of the airlock channels. This is to protect them from anyone who joins the server with the intent of causing trouble or upset with their name or first message. New members can’t see the server or anyone in it because we don’t want to put our community at risk of harassment.

How to Set Up the Airlock

NOTE before starting: one of the things that I really struggled to get my head around when setting this up is that on Discord, ‘@everyone’ is not a role. When I first set things up, I used it as though it was one and had to do a bunch of permissions cleanup when I implemented this new system. Think of ‘@everyone’ just as a way to message the whole server rather than anything else and that will help. It’s confusing because it appears in the roles list, but it’s there as a default.

Start by letting your community know that you’re going to be making some changes on Discord – it can be worrying to check in and see your permissions have been removed and you don’t know why. Just make a post in a place that everyone can see to let them know that you’re performing maintenance and that things may look different for a while, but things will settle down soon.

This set up utilises 2 roles and the default behaviour for no role. Decide what your roles are going to be called. Mine are called ‘new here’ and ‘stream team’. I also have role tags for pronouns (I’ll talk more about this later), a special role for myself, a role for my admin, and a moderator role. The MEE6 bot also gets a role.

Set ‘@everyone’ to have no permissions at all. You don’t want someone who has just joined and doesn’t have a role to be able to see or do anything.

Your equivalent of ‘new here’ should also have no permissions – this is because we are going to use Discord’s category and channel settings to manage what they can do, but by default, they can’t do anything.

Your equivalent of ‘stream team’ should then be given the permissions you want regular members to have. This will differ from server to server but I’d recommend giving “read text/see voice channels”, “send messages”, “read message history”, and “add reactions” as a minimum, and make sure they cannot “mention @everyone or @here”.

Next, you’re going to want to set up your Discord category where people will “land” and are “airlocked” before being able to join the main server. 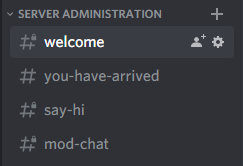 The ‘welcome’ channel is where Discord posts the automated messages when someone joins the server. It’s important to our setup to keep this channel because we need to keep an eye on people joining the server so we can start them along this process.

When people join a Discord server, they don’t have a role: they are just part of ‘@everyone’, which as mentioned, isn’t a role in the same way that others are. We use this here because by default we set up this category so the ‘@everyone’ role has “default” permissions here, which we already configured to be completely locked down.

The next channel you want to make is basically your holding pen. It’s a channel that has a post from me saying hello, stating the server rules, and letting them know that someone will come along shortly to get them sorted. It’s important to set people’s expectations for your server and this channel is a place you can do that: you make the rules front and centre, and it’s clear you and your mods are attentive.

Process of a New Member

After you notice in the ‘Welcome’ channel that a new person has arrived, they should be vetted (essentially for my server this just means making sure their name isn’t something offensive), and then you can give them the ‘new here’ role. This role should enable them to see a new channel (mine’s called “say hi”) where they can see another message from you, and actually post in your server for the first time.

For my server, this is where the pronouns come in. I strongly believe in the importance of normalising sharing pronouns in the same way as you share your name and making it easy for other people to see them. I’m not going to go into why in this post, but it gives me a firm required action for new members: choosing their pronouns. As a general rule, if anyone has a problem with doing this, they are unlikely to fit into the community. Of course, there are exceptions and this won’t work 100% of the time. I’ve already had someone approach me to discuss their genuine problems with this process; luckily we were able to discuss and decide on a compromise that enabled both me to maintain this rule and them to feel comfortable. It’s really important to be firm but also understanding and flexible where necessary.

So, people with the ‘new here’ role can see the ‘say hi’ channel which has a message asking them to say hello to the mods and request their pronouns. After they’ve done this, they get their pronoun role added, they get their ‘regular member’ role added, and they get their ‘new here’ role removed. Then they are free to participate in the server.
I also have a read-only channel in the main part of the server which just has the rules, so they are easily accessible for everyone.

Please feel free to use these Discord rules on your server – a credit would be great if you did.

I checked everything worked by having a friend create a “dummy testing” Discord account and telling me what they could and couldn’t do or see with various roles added/removed. Discord have mentioned adding the ability to “view server as role” which would make this easier. Regardless of how you do it, a bit of testing will make sure your server is set up and operating exactly as you want.

This may seem like a laborious process but it works very well for smaller servers, and larger servers can either set up bots to automate some of the processes or have more mods to ease the load. I think it’s very much worth the small time needed to protect my server from trolls and keep my community safe.

What is your process? What do you do differently, and do you think there are any ways I can improve my system? Let me know in the comments!

Also, just another reminder that I based my system on the one in the video by Stephaneee_Plz on Discord safety – huge thanks to Stephaneee_Plz for making it in the first place.