Outer Wilds is a mystery space game but it feels like a little universe sandbox art piece. It’s five or six planets and a comet, beautifully imagined both as intricate worlds, each distinct in how they look, feel, and work; and as one whole puzzle to solve. I live-streamed my playthrough and have a few Thoughts and Feelings about the game (and about live streaming) I’ve only really begun to process since putting the controller down and turning the camera off, and I thought it would be nice to share them.

As far as the traditional trappings of video games go, Outer Wilds is severely lacking. There’s no inventory, no combat, no crafting system, no quests… it’s just a universe. You quickly learn that Hearthians, the species you belong to, have a solid history of space flight and everyone is mostly sure your ship won’t explode on your inaugural journey, besides you’re the first astronaut with a translator, you HAVE to go to space. So to space you go.

This game delivered little packets of joy dotted through the greater satisfaction of solving the mystery. The first of these for me was that you can see your feet! I don’t know why this delighted me so much. I was also thrilled by the fact that the whole race of Hearthians are gender-neutral and always referred to as “they/them”. While it’s a shame that enbies have to wait for a literal alien race for representation, it was very cool to be a protagonist with a gender-neutral pronoun. The Nomai writing you translate is scrawlier and messier when written by children. I could go on.

Mobius Digital accomplished something really difficult with Outer Wilds – an entirely non-linear puzzle. You start with the characters on Timber Hearth offering you some suggestions, but there’s no quest log, no floating marker telling you where to head next. You can go anywhere and find stuff in any order and it will still eventually piece together the same. Your brand of curiosity will drive you. You don’t need to get new gear or level up before you can approach certain places – what is missing is your knowledge on how to approach them and what to expect. You probably can traverse Dark Bramble without ever going to Ember Twin, but if you visit the Angler Fish skeleton in the Sunless City first you’ll learn that the fish are blind but highly reactive to sound, making your traversal of the eerie, portal filled Dark Bramble easier.

It would be easy to imagine that a game with no linear plot or progression would struggle to create a coherent story, but that certainly isn’t true with Outer Wilds. The way I experienced the game was that the story was built out of questions and their answers. Why is the sun exploding? What is the Eye of the Universe? How come these planets are all littered with Nomai skeletons – what happened to them? The game poses the questions subtly, wordlessly but with no less gravitas. 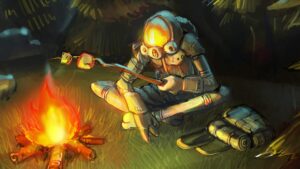 For a game with almost no cutscenes and very few other characters, there are some surprisingly poignant, emotionally charged moments delivered extremely well. When I first landed on The Interloper and discovered a recording by a Nomai worried about their comrades who had gone to explore the inside of the comet, I had no idea that chasing that particular thread would deliver such a gut punch. You can feel the worry building as the words left behind by this precursor race talk about energy levels, and you can see the Ghost Matter, one of the few things in the game that can damage you, in much greater quantities here than any other place. When you eventually slide your way through the treacherous tunnels and the scene before you begins to make sense; that was a tough moment. That those inquisitive, advanced, tenacious people were wiped out in an instant with no warning… well, it answered the question about all the skeletons but left me with a sad, sick feeling in my stomach that I recognise from other media, but rarely video games.

I think here it’s interesting to stop and take note of where I think my experience differed because I was streaming Outer Wilds. There’s a moment where you discover for sure that the supernova, which I long believed was being caused by the Nomai’s thirst for energy to power the Ash Twin Project, was a natural event – the Sun Station project failed and the Nomai never caused a supernova. The catastrophic end of the star heralded time and again by the haunting music that kicks in at 20 minutes or so of the time loop was just the natural end of that solar system. The place where every moment of the Hearthian’s life was lived, over in a roaring moment of incandescent heat.

Thinking back on my reaction to this experience, it was both enhanced and diminished by the fact that I was streaming. At the time, I don’t think I immediately understood the implications of what I was reading in the Sun Station. I was concerned with moving on, keeping the stream entertained, and making progress. I was very new to streaming and very aware of the scrutiny (real or imagined) placed on me by viewers. I was also painfully aware of the fact that I was taking a long time to get anywhere with the game – and it turns out that my playthrough took twenty-eight hours, which is about ten hours longer than the “average”, whatever that means when it comes to this game.

On the other side of the same coin, when I did finish the game I had my viewers there with me to reflect and discuss some of the impact of the discoveries after the fact. The sense of sadness wasn’t lost, it was just diffuse. I thought about it myself when I wasn’t playing and then discussed it with my viewers. Was this better or worse than if I had just been playing it on my own?

Well, to tell the truth, I don’t know if I would have finished the game if it hadn’t been for the stream. Although Outer Wilds represents something extremely special and exciting in video games, something that desperately needs to exist and I can’t wait to see more of, I just don’t think it was made for me. The dexterity required to traverse the areas quickly and accurately was just out of reach for me, requiring a frustrating amount of a try-fail-retry loop that was too long and intricate for comfort, like a bad Bloodborne corpse run. The puzzles just landed on the wrong side of obtuse for me and without the assistance of some friends in my stream chat who could manage that perfect balance of specific, but spoiler-free hints rather than just telling me what to do, there are some things I wouldn’t have finished. 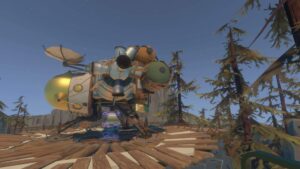 Huge numbers of people have declared this game to be their new most favourite game ever, which is definitely a double-edged sword for me. I want more games like this. I want more games that don’t rely on combat and crafting and quest markers; games that explore narrative as the primary focus; games that have such lovingly crafted environments and characters. I just wish it was a little more approachable. Maybe take the really obscure puzzles OR the frustrating dexterity and focus a little more? I would definitely have found the puzzles more palatable and been more willing to take my time and experiment with them if they weren’t hidden behind frustrating and difficult traversal. I seem to have a different stance on this to many people, who felt that because death in the game is so inconsequential, they could experiment more.

I think for future story-centric games that I stream, I’m more prepared for the change in how I play while on stream. I’m a bit more confident to take my time over things, I know I won’t get pilloried by the community I am trying to build and anyone who does have anything to say about it probably isn’t the kind of person I want in the space I am trying to create anyway.

If you’ve got this far, thank you – despite my gripes and struggles I still think Outer Wilds is an incredible game that deserves all kinds of love and attention. Hopefully, you’ve either played it yourself and have your own thoughts – please leave a comment and let me know what you think – or you’ve watched mine or someone else’s playthrough and aren’t going to play it yourself.

Sadly due to mistakes made, the last episode is missing so I’ve hidden the list from view on YouTube.

Good read. It’s interesting about how streaming changes the emotional impact of a game; having less time for self-reflection and more pressure to say something.

I think it’s crucial for a game in which you’re expected to die and respawn a lot does need to focus on respawning and letting you get back to where you were quickly. Games like Celeste let you focus on the puzzles by taking less than a second to reset, while it seemed from what I saw of you playing Outer Wilds that you were occasionally waiting up to 10 or 15 minutes to get back to a similar place? I think it’s right to be frustrated by that.

Nice thoughts overall, and good for someone like me who’s never played and doesn’t really have the time or interest, but kind of wants to experience this sort of thing, even if second-hand.

Yeah – luckily there is an in-game feature to speed time a little bit so there was less waiting, but it’s never told to the player; someone in my stream chat told me about it. Thanks for the kind words.

I absolutely loved outer wilds so much. I think i may play it again now after reading